Containers can be thought of as virtual machines. A virtual machine is complete deployment of a computer. It will have a hyper-visor or virtualization layer that simulates a real computer, a complete operating system and then the applications it is running. A container on the other hand only has the resources necessary to run the application it is hosting. It uses the host systems operating system and other resources. By sharing the operating system, containers are much less resource intensive and start more quickly. 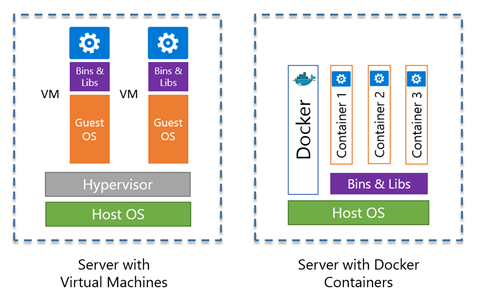 Docker is the main container service in use. It works on all the major operating systems and supports both Linux and Windows containers. However, Linux containers are more mature and have broader community support. Docker containers are also supported by major cloud services such as Azure and AWS.

What is important about containers?

Containers are important because they are less resource intensive than virtual machines. As such they start up faster and more can be hosted on a single host. It is not uncommon for Docker to be run inside a virtual machine.

Docker is an open source project that has standardized containers. The idea of containers is not new, the idea goes back to how mainframes work. Linux introduced containers but it didn’t offer an easy way to create containers. That is where Docker came in.

In Docker containers are created from images. Images are representations of the file system (like a zip file) containing only the files specific to the application that will be run in the container. This means that if there are files in /bin/ and /tmp/wwwroot then the image will have those just those files. The container is a running instance of the image. A single docker host can run as many containers as it has memory and CPU to handle.

Docker also provides the tools needed to build container images from scratch or from other container images. As an example, as a Microsoft stack developer I use Asp.net Core to build applications. Microsoft provides a container for compiling Asp.Net Core applications inside a container, I’ve built my own custom version of their image that adds a few additional tools that I use as a part of my build process.

Failing to mention the Docker Hub would be a mistake. As mentioned I have created my own image based on Microsoft’s image. The Microsoft image is distributed through the Docker Hub. You can search the hub and find thousands of images contributed by other companies and individual developers. You can sign up for your own account free of charge and contribute images to the community as well.